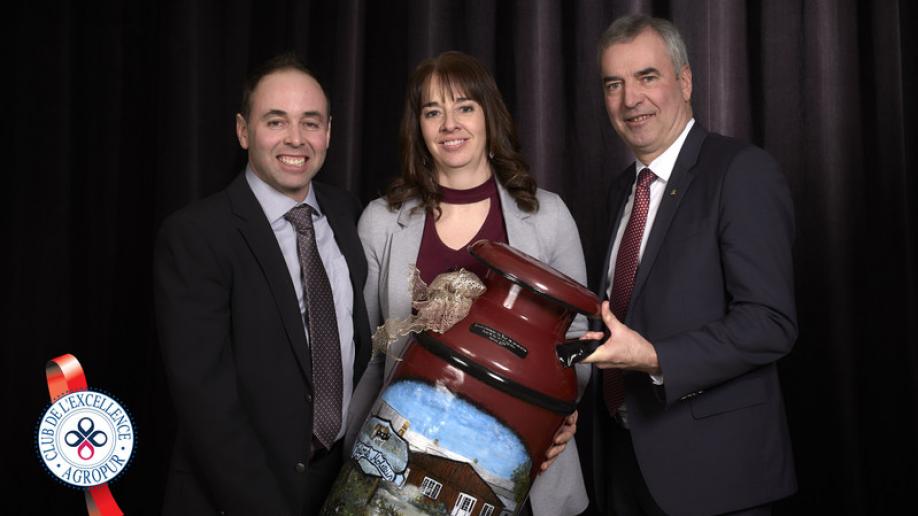 The cream of milk production

For the second year in a row, Ferme Jolipré Holstein Inc., located in Saint-Moïse, Quebec, distinguished itself by achieving the best overall combined result for milk quality and farm inspection. The farm, owned by Marie-Josée Turcotte and Régis Lepage, has a herd of 90 Holsteins, including 50 lactating cows which produce an average of 10,500 kg of milk per animal. An honourable mention was also awarded to Braefield Farm, located in Penobsquis, New Brunswick.

Chosen among all members in Quebec, Ontario, New Brunswick, Nova Scotia, and Newfoundland and Labrador, these new champions have been inducted into Agropur's Club of Excellence. Since its creation in 1988, the Club of Excellence has welcomed more than 2,000 award winners into its ranks. All Agropur members are eligible to enter the contest and a rigorous selection process is used to determine the winners.

"Our cooperative has always played a leadership role in on-farm milk quality amongst our members.  The excellence of the products offered to consumers by the Cooperative that begin with high quality milk is a must now more than ever. We can be proud of the efforts made in recent years." stressed Mr. René Moreau, Agropur president.

Agropur Cooperative is a North American dairy industry leader founded in 1938. With sales of $6.4 billion in 2017, the Cooperative is a source of pride to its 3,290 members and 8,300 employees. Agropur processes close to 6.1 billion litres of milk per year at its 39 plants across North America and boasts an impressive roster of brands and products including Natrel, Québon, OKA, iögo, Farmers, Agropur Signature, Agropur Grand Cheddar, Island Farms, BiPro and Olympic. Agropur's head office is certified LEED Silver.