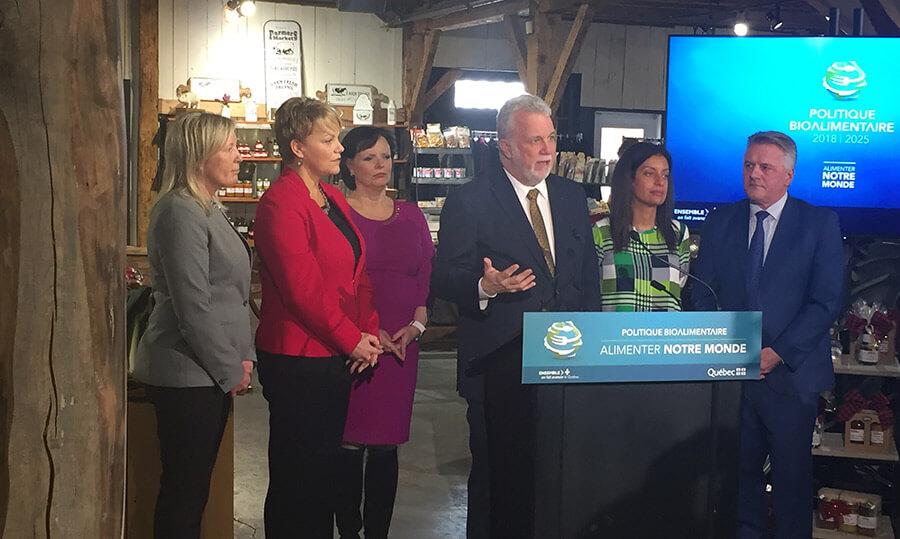 On April 6, the Quebec government unveiled its 2018-2025 bio-food policy, Alimenter notre monde, accompanied by $5 billion in spending over five years. The goals of the new policy are to better meet consumers’ expectations and support bio-food businesses and organizations. Agropur was at the announcement at Quinn Farm in Notre-Dame-de-l’île-Perrot and reacted positively to the policy, which is a Quebec first.

Attendees at the announcement were offered Agropur’s L’Extra Camembert, which was recently rated the best Camembert in the world at the World Championship Cheese Contest. L’Extra was a sensation at the event and was hailed as an international ambassador for Quebec’s food industry.

Quebec Premier Philippe Couillard and four of his ministers were on hand for the announcement. Laurent Lessard, Minister of Agriculture, Fisheries and Food, noted that the policy had been developed in conjunction with food industry stakeholders. In November 2018, Premier Couillard and Minister Lessard visited our Head Office during preparations for the food summit and development of the policy. At the time, Agropur had suggested that Quebec adopt a real agri-food strategy, as Ontario has done. We had also recommended that this policy aim to increase production and processing in Quebec.