A life dedicated to cheesemaking: Interview with Roger Krohn

It all began with the marriage of Roger Krohn's grandparents in 1905. His grandfather worked for a cheese and butter company in Kewaunee County, Wisconsin. His grandmother was the owner's niece. Together they built up Krohn's Dairy. Then their son Leo, Roger's father, took over. Leo oversaw many changes, the biggest coming around 1960 when the cheese plant started making mozzarella and provolone.

In 2008, Agropur acquired Trega Foods, which included Krohn's Dairy (now our Luxemburg plant). To this day, we have many third- and fourth-generation members of the Krohn family on staff. 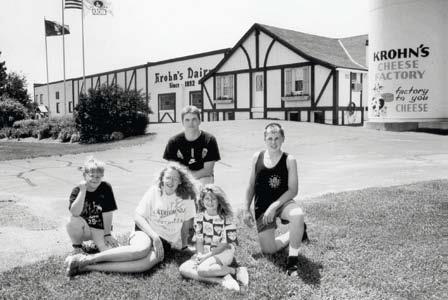 So an introduction to Roger Krohn was a perfect choice for the first issue of Agropur's newsletter. Melissa Udovicic, Agropur's Director of Marketing and Communications in the United States, interviewed him.

Melissa Udovicic: How long have you been in the cheese business?

MU: How did you learn your trade?

RK: Largely at the Centre for Dairy Research. Then I started working beside my dad and Arlie, my brother-in-law. They taught me the ropes on cheesemaking, especially in mozzarella.

MU: Has cheesemaking changed in the 40 years since you started?

RK: Back in the 60s and the early 70s, it was a lot more manual labour than it is now. We did it by hand: carted cheese to the brine. Now it’s all on conveyor systems. A little before my time, they actually hand-moulded mozzarella. They used hot water to melt the curd, then they stretched it with wooden paddles, then they hand-formed it into moulds, and then brined and packaged it. It was a lot more work. Now there are machines doing all of that for us. But the physical art of cheesemaking has not changed that much. You still have to start with good-quality milk.

MU: How has cheesemaking improved?

RK: The tools we have today let us do the same things but do them better. You still need the basic building blocks to make cheese: good quality milk, a great starter program, rennet. We still go through all these steps but now we can tell the computer what we want. So you’re going to have more consistency vat to vat, batch to batch, day after day. Mechanization has allowed us to make a more consistent piece of cheese. The art of cheesemaking has not changed; it’s just that we get from point A to point B a little bit differently. Our end product is similar but probably a little better because of our ability to be more consistent than we were decades ago.

MU: Do you have any fond memories from when you were young related to the dairy industry?

RK: I don’t know if I should say this, but when I was young my mother was working in the plant, in the early 60s, so I really did grow up in the plant. I had a little pedal tractor and I would ride it all over the plant. On Sundays, when we weren’t making cheese, I would put water in the cheese vats and I had some little boats and I would float them in the vats.

MU: That’s adorable! So, what do you like most about your job?

RK: When I go out with my family for pizza, I’ll sit there and look around at all the families enjoying a great pizza – to me, that’s the most rewarding part of my job, just to see people enjoying the end result of what we do here at Agropur.