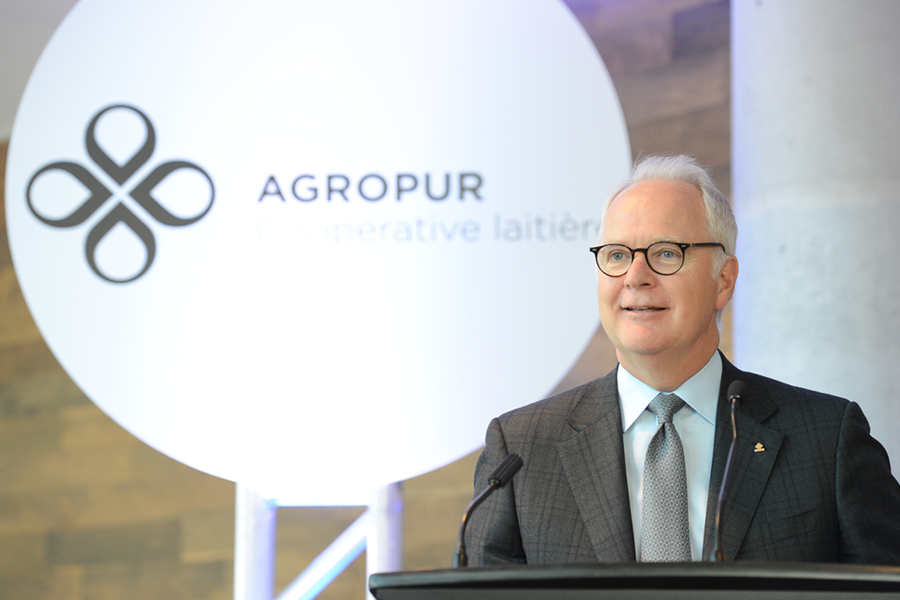 Published in the November 26 edition of Les Affaires

Robert Coallier was interviewed by journalist François Normand at the Agropur head office. Below is the full transcript of their conversation.

In a few short years, the Quebec cooperative Agropur has grown to become the fifth-largest producer of cheese and dairy ingredients in the United States. Agropur first moved into the U.S. market in 2002, and the cooperative's U.S. expansion is far from over. Read on to learn more about the game plan.

Agropur is riding high in the United States. In 2015, U.S. earnings represented 43.8% of sales, up from 35.9% in 2014. This success came from adopting a very different business strategy south of the border. In Canada Agropur's brands like Natrel, Oka and iögo are available in grocery stores, whereas in the United States the cooperative focuses on making dairy products for existing U.S. brands.

"In the United States, Agropur's strategy is B2B," explains Agropur CEO, in a feature interview with Les Affaires at the cooperative's new head office in Longueuil.

That means that Agropur's U.S. products are purchased by big American companies like Kraft Heinz and Master Gallery Foods (a cheese maker), who then sell them under their own brand names all over the country. The cooperative also supplies the pharmaceutical industry with lactose used to make caplets and capsules.

While Schroeder Milk does sell milk under the Natrel brand in the United States, that's an exception, notes Robert Coallier. In his 30-year career as an executive Coallier has held positions with Molson, Dollarama and the Caisse de dépôt et placement du Québec. He has been at the helm of Agropur operations since 2012, under the direction of board president Serge Riendeau (who will retire in February).

The U.S. dairy market is very different from Canada's, which is why Agropur opted for a B2B rather than a B2C strategy, notes Robert Coallier.

Though the U.S. is home to 321 million people, the dairy market is highly fragmented. Producers often specialize in a specific product, like cheese. And competition is stiffer than in Canada.

Canada has 9 times fewer people (35 million), and a supply management system that limits foreign competition. This makes for a more homogeneous market with certain regional differences, as in Quebec. Canadian producers also tend to be highly diversified, with three big players—Agropur, Saputo, and Parmalat, from Italy—dominating the national industry.

The specialists interviewed by Les Affaires believe Agropur is on the right track with its U.S. strategy.

With the United State's generally lower retail prices, it would be challenging for Agropur to stay competitive selling directly to consumers, says Sylvain Charlebois, a specialist in food distribution and agricultural policy at Dalhousie University in Halifax.

"To make it in the United States and successfully market a food product, you have to spend 9 to 10 times more on marketing than in Canada," he notes.

This doesn't mean the idea of one day selling Agropur's own brands in the American market is off table. But it won't be happening in the short term, according to Robert Coallier. "I'm not saying we won't get there one day. But for now, our business plan is strictly B2B. It's served us well so far."

Agropur's U.S. sales growth is proof positive that the B2B strategy is a dynamic one. Much of the growth has come from the $209 million Agropur has invested in the United States since 2014. "We're building, we're growing, and we're modernizing our facilities to meet demand," explains Coallier. The strategy has enabled the cooperative boost market share and grow its client list, though Agropur does not release actual market share figures.

To take one example, the Luxemburg cheese plant alone has seen $110 million in investment to increase production capacity.

The cooperative is also benefiting from favourable conditions in the U.S. market, despite sagging retail prices for dairy products. For example, in the last five years, a boost in disposable income in the United States has spurred growing demand for dairy products and, as a result, total industry sales, according to the research firm IBISWorld.

Robert Coallier feels that swift U.S. growth is critical for Agropur, especially in an increasingly globalized dairy industry. "To secure our cooperative's future, we have to make sure we remain a big player. Our customers expect us to be big enough to meet their needs."

A veteran of mergers and acquisitions

Mergers and acquisitions are another lynchpin of Agropur's growth strategy, in both the U.S. and Canada. Since its foundation in 1948, the cooperative has made no fewer than 140 mergers or acquisitions, including 18 in the last decade—an average of 1.8 per year.

Agropur first broke into the U.S. market in 2002 when it acquired Deutsch Käse Haus in Indiana. Its next major U.S. acquisition was Trega Foods, a Wisconsin cheese producer.

But the transaction that really made the cooperative a major U.S. player came in 2014, when Agropur acquired Davisco Foods International, a cheese and dairy ingredients producer with operations in Minnesota, Idaho and South Dakota.

The transaction price was never made public, but the Canadian Press estimated sales of the acquired operations at over $1 billion. Davisco is not only well-positioned in the United States but also an exporter to Europe and Asia.

"This acquisition got us started down the road to where we are today: the fifth-largest processor of cheese and dairy ingredients in the United States," notes Robert Coallier.

To continuing growing in the U.S. market, Agropur will focus on internal growth and on additional mergers and acquisitions, without getting carried away.

"We aren't saying we're going to be making three acquisitions next year" notes the CEO. "We know what we want to do, and where. But we can only make a move when there's a business for sale. That's not a factor we can control. What we can control is internal growth."

American managers are in the driver's seat of Agropur's American operations, though Robert Coallier says he speaks to Doug Simon, president of U.S. operations and a former Davisco executive, every other day. "I don't tell him what to do," he says. "I just want to be in the loop, see how things are going, share ideas with him. I'll say, 'Doug, I heard about something going on, could we check it out?' It's a very friendly relationship."

Louis Hébert, strategic management specialist at HEC Montréal, is a fan of this approach.

And to anyone accusing Agropur of not being hands-on enough with its U.S. holdings, he suggests flipping the situation around. "Imagine a U.S. company that took over a Quebec firm. Would the company be better managed by Quebecers, or by Americans way off in the States? Obviously, the company would be better managed from here in Quebec. Well, that same reasoning works the other way around as well," he notes.

The specialists we interviewed stressed that operating in the U.S. market comes with its fair share of challenges and risks.

For Robert Coallier, the biggest challenge is "being smart about managing growth." But he stresses that the challenge isn't overwhelming, since Agropur is handing it well.

But you always have to stay on your toes, he says. "You always have to make sure you have talent you can truly count on, before you choose to pursue growth. Agropur has an incredible team all over, and the United States is no exception. For example, at our Luxemburg, Wisconsin plant we developed a five-year plan—and then fulfilled it in just three years!"

The main risk facing Agropur in the U.S. is actually systemic risk, not specific to their operations, notes Louis Hébert. "Let's say there was a sharp drop in U.S. milk consumption. That could impact sales."

Yan Cimon, a specialist in international strategy at Université Laval, sees another potential risk for the Quebec cooperative: its identity. In just a few years, the size of U.S. operations will actually overtake Canadian operations, and that will move Agropur's centre of gravity south of the border."

Agropur has to make sure it doesn't lose its identity, its cooperative spirit, and the respect of its partners, which have been a big part of its success."

The five pillars of long-term growth

1. Brand strategy – In Canada, Agropur leverages brand recognition to grow its sales. "In recent years we've invested heavily to make sure consumers truly have a place in their hearts for our brands," says Agropur CEO Robert Coallier. For milk, Natrel is the flagship brand. For cheese and yogurt, it's OKA and iögo. The idea is to have these brands grow, so they become true leaders in their niches. "For example, we want to make OKA 'Canada's cheese' the way Brie is associated with France."

2. Innovation – To foster innovation, the cooperative launched a new program on October 31. Inno Challenge is an open innovation initiative launched jointly with Montreal's Quartier de l'innovation (QI), AG-Bio Centre (a business incubator and support program) and NineSigma (a firm that helps companies embrace open innovation). The main challenge is to find the top creative talent, no matter where it is—in Quebec, Canada or elsewhere in the world. "We're canvassing people for ideas on ways to reinvent dairy products."

3. Cost control – Like any other business, Agropur tries to control costs. And flagging retail prices for dairy products like blocks of cheese in the United States (and Canada as well) make cost control even more critical. "In 2002, we set the objective of cutting our costs by $75 million over three years. And in the end, we did even better—we cut costs by $84 million," says Robert Coallier. The new objective is to cut costs by $100 million by 2018, no matter how much revenues grow in the same period. To get there, Agropur is constantly reviewing its processes through performance analyses comparing all 38 North American plants. The cooperative has also optimized its supply chain.

4. Human capital – This year, Agropur chose five core values to better assess potential candidates: boldness, collaboration, excellence, integrity and communication. "The other day someone told me something I really liked: 'We were interviewing a candidate who we thought was very good, but who didn't quite fit with our values. So we decided not to hire them, and to keep on looking instead,'" said Robert Coallier. To attract young people, the company built a new headquarters in Maricourt, a wooded area in Longueuil. (The project attracted citizen opposition because it destroyed wetlands.) It's a truly state-of-the-art facility, where (to give but one example) all employees use Skype for internal communications.

5. National and international growth. To secure its future, Agropur plans to continue to grow in Canada and the United States, through a combination of internal growth and mergers and acquisitions. Asian and European sales may also be on the rise, since Davisco Foods International (acquired by Agropur in 2014) has offices in China, Singapore, Switzerland and the Netherlands. What about Brazil? Saputo may be planning to make a move there, through an acquisition, but Robert Coallier isn't interested. "We have no plans to move into South America, for now," he says.